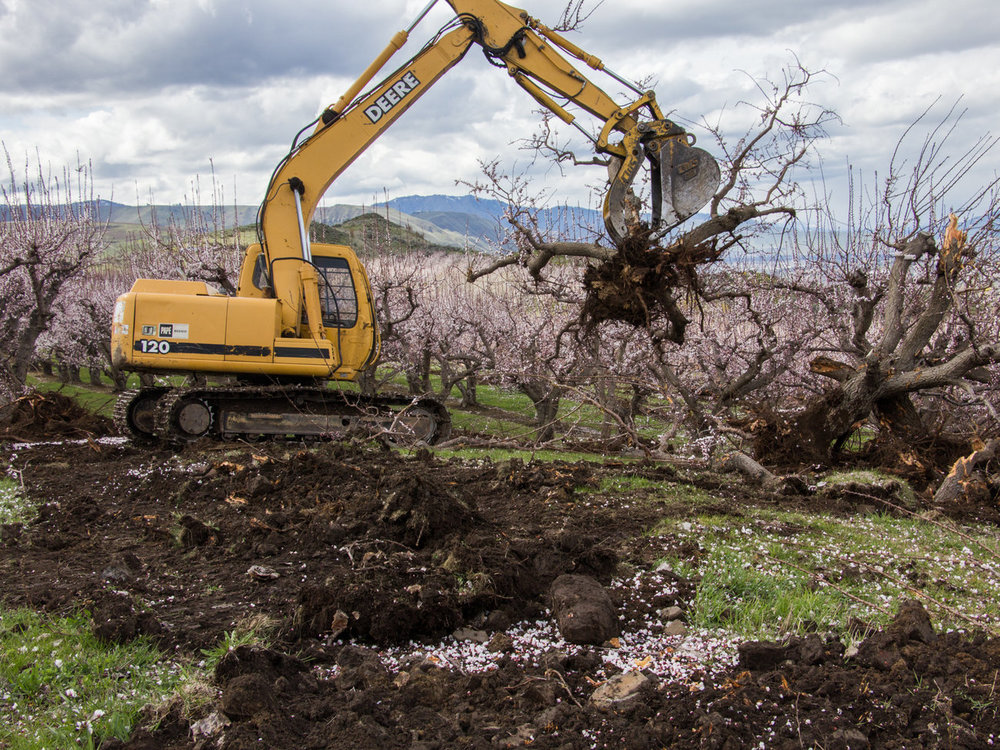 APRICOT TREES ARE REMOVED TO MAKE WAY FOR COSMIC CRISP. PHOTO BY DAN CHARLES, NPR.Apple growers in Washington state, who dominate American apple production, are starting to plant a new kind of apple. It’s the fastest launch of a new variety in history.

These farmers have been looking for a new variety to grow. Older types of apples, like Red Delicious, have fallen out of favor among American consumers. So growers are ripping out old fruit trees — in this case, apricot trees — to make way for an apple variety called Cosmic Crisp. It’s the most successful result so far of an apple breeding effort that Bruce Barritt began at Washington State University more than 20 years ago. 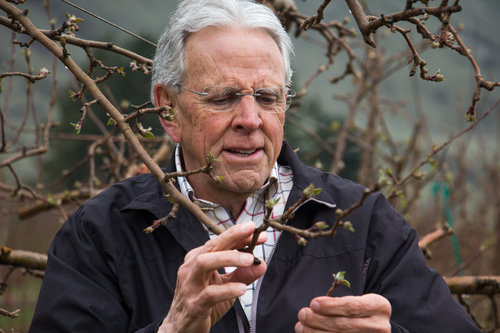 Barritt selected the tree called WA 38 — now branded as Cosmic Crisp — from among thousands of seedings that he created by cross-pollinating the blossoms of parent trees. Cosmic Crisp, he says, preserves its taste better than any other variety during months of storage. “Crispness, juiciness, acidity, sugar; all that combined just doesn’t exist in any other variety,” he says.

Cosmic Crisp was just released for commercial planting, and this spring, apple growers are planting all the trees that they can get their hands on. They’ve reportedly ordered 12 million Cosmic Crisp trees for planting over the next few years. 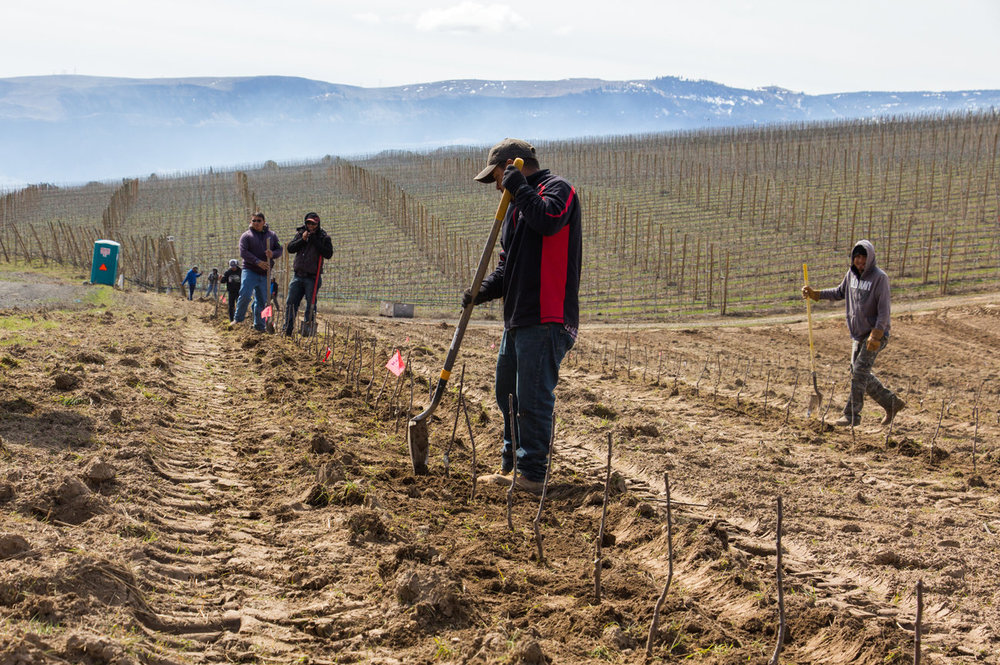 WORKERS AND FRESHLY PLANTED COSMIC CRISP TREES IN AN ORCHARD OWNED BY MCDOUGALL AND SONS, NEAR WENATCHEE, WA. PHOTO BY DAN CHARLES, NPR.

Replanting can cost more than $50,000 per acre. Farmers say that they’ll need premium prices for these apples in order to recoup that investment. If Cosmic Crisp apples sell only for the same price as, say, Gala apples, “it’ll be a wreck,” says farmer Jan Luebber. So these new plantings are a big gamble for apple growers. 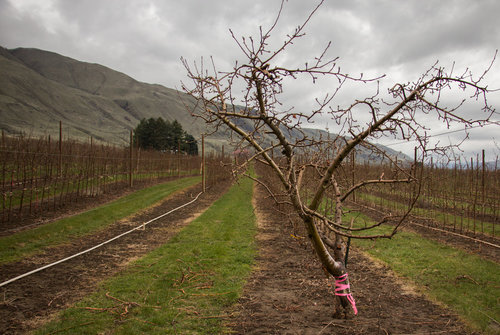 Every Cosmic Crisp tree is derived from this original “mother tree,” which still stands where it was planted 20 years ago, in a research orchard managed by Washington State University. It’s been reproduced through old-fashioned cloning techniques, grafting buds from one tree onto existing apple tree roots. Those buds grow into copies of the original tree.

Tree nurseries like Willow Drive Nursery, in the town of Ephrata, Wash., play a key role in the Cosmic Crisp launch. They reproduce these trees on a massive scale, growing new trees from each bud that forms on existing trees in their “mother orchard.” Each fall, nurseries dig up these small trees and move them into cold storage, ready for planting in orchards the following spring.

The first Cosmic Crisp apples will be available for sale in the fall of 2019. Within a few years, Washington’s apple growers may know whether they bet they’ve placed on this new variety will pay off. 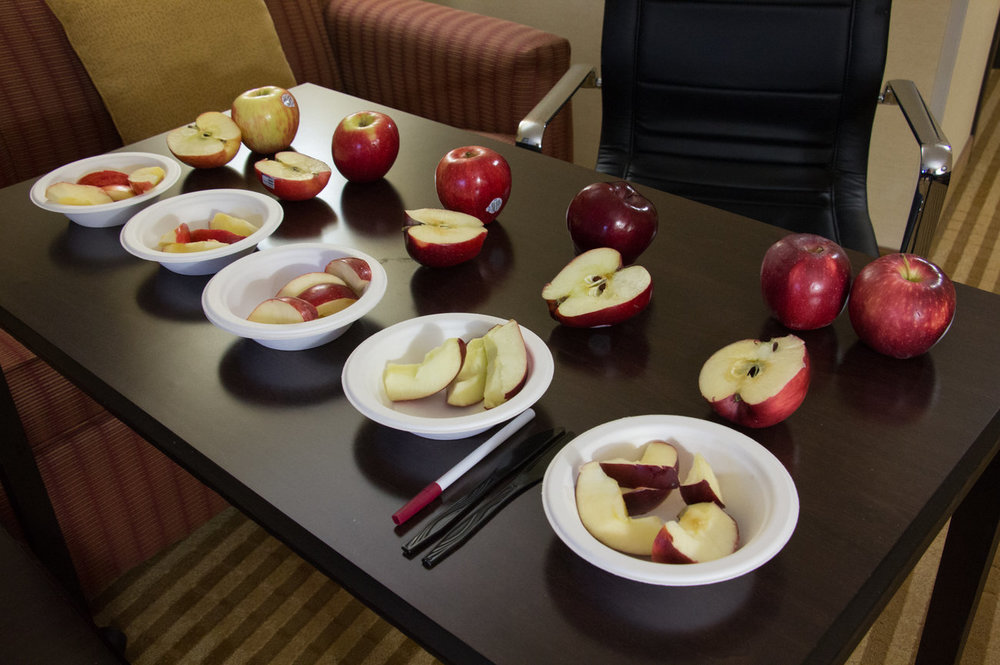