THE SKY’S THE LIMIT FOR COSMIC CRISP™ APPLES

Proprietary Variety Management (PVM) president Lynnell Brandt says limitations on certified budwood are the reason Cosmic Crisp apples haven’t been planted too extensively to date, but virtually all of Washington State’s leading growers are on board with the cultivar with aggressive expansion in the pipeline. 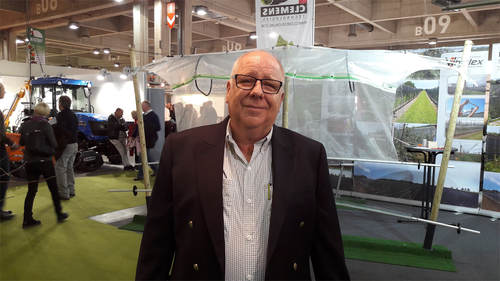 The state has been granted exclusivity for the variety’s commercialization in North America for at least 10 years.

As a cross between Honeycrisp and Enterprise apples, Brandt describes the Cosmic Crisp as having some acid but it’s more on the sweeter side of the spectrum, with “incredible” shelf life and storage.

“Next year will be the first planting and there will be 629,000 trees planted,” the industry veteran told www.freshfruitportal.com during apple industry event Interpoma in Bolzano, Italy late last month.

He says there are now 5.2 million trees on the books to be planted in 2018, followed by well in excess of three million in 2019.

“We know that’s going to climb, because that’s not a normal situation to be ordering that far out but we know there’s a lot of interest and intent.

“There’s a realization within the Washington State industry that the older standby varieties are not returning much to the grower – it’s the new proprietary varieties that are returning the most, so there’s a need then to replant the Golden Delicious, the older Fujis, and especially Red Delicious.

“Washington State University has come out with this apple that seems to be a ‘WOW’ apple – it’ll keep 52 weeks out of the year, it has a good profile, has won over a lot of consumers in testing, and so forth.”

Brandt forecasts the industry to reach 10 to12 million boxes of Cosmic Crisp apples within the next six to seven, before volumes climb from there at a “very high rate”.

While it is likely more of the Cosmic Crisp plantings will be to replace older varieties, Brandt emphasizes the importance of new plantings as well.

“All of the new plantings with the new techniques and the new spacing and so forth are having a much higher production per acre than the older plantings, so volumes will go up.”

He says the apple’s potential is so large that major players can’t afford to not get involved with Cosmic Crisp, and therefore “all of them” are on the books.

“I’m not being facetious with that – once you get something started like that then none of them as marketing agencies can be left out. They have to be able to have the product to be able to compete, so they’re all getting involved,” he says.

Brandt adds PVM has a contractual relationship for the variety with Italian cooperatives Vog and VI.P for the Cosmic Crisp apple in Europe, but the plant materials are still in the process of going through quarantine.