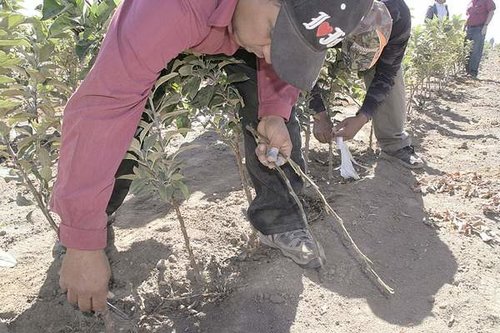 EPHRATA, Wash. — Ricardo Santacruz stoops over a small rootstock tree and slices a notch in its trunk a few inches above the ground so fast that if you blink you’ll miss it.

With equal speed he slices a bud from a short chunk of Cosmic Crisp apple limb from a bundle of them on his hip, places the bud in the notch and moves onto the next tree.

Cosmic Crisp is the new Washington State University variety the Washington apple industry believes will become more popular than Honeycrisp and hopes is the state apple of the future.

RICARDO SANTACRUZ REACHES FOR A COSMIC CRISP™ LIMB OF BUDS AS EDUARDO MORALES GETS READY TO WRAP BUD BEHIND HIM. PART OF THE CREW OF 45 IN BACKGROUND BUDDING COSMIC CRISP™ BUDS ONTO ROOTSTOCK TREES AT WILLOW DRIVE NURSERY, EPHRATA, WASH., SEPT. 12. PHOTO BY CAPITAL PRESS.

“This year Cosmic Crisp is the big dog,” said Jim Adams, co-owner, adding it’s over one-third of what the company budded this August and September for 2018 sales.

“I know we’re close to 4 million in the state for Cosmic Crisp for all nurseries for 2018,” Adams said. “Excitement is there.”

Cristy Warnock, operations manager of PVM (Proprietary Variety Management), Yakima, said she’s awaiting an update from nurseries, that the estimate in March was 2 million but that 4 million is definitely likely for 2018 and 2019 combined.

An offspring of [Enterprise and Honeycrisp], Cosmic Crisp is the first apple bred in Washington to be exclusively grown by any and all Washington growers. The first commercial plantings will be next spring and fruit will reach markets in 2020.

Santacruz’s knife is so sharp it looks like he’s cutting butter. Despite bandages and tape, his thumb and fingers are a bit bloody. With five-years of experience, the 39-year-old is notching 3,000 to 4,000 trees per day, about 500 per hour or eight to 10 per minute. 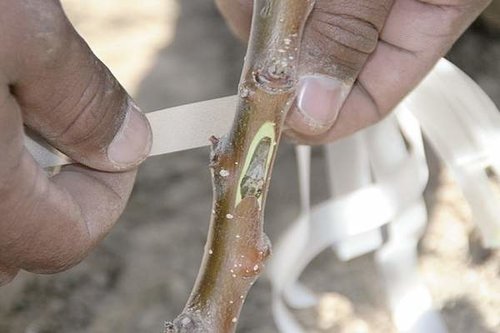 COSMIC CRISP™ BUD PLACED IN NOTCH OF ROOTSTOCK TREE WILL BE WRAPPED IN PLASTIC TO HEAL IN. NEXT SPRING THE STEM WILL BE CUT OFF ABOVE THE NEW BUD TO GROW A COSMIC CRISP™ BRAND TREE. PHOTO BY CAPITAL PRESS.

“A lot of skill goes into it. He has to make a match, side-to-side and up and down. It it doesn’t fit, it doesn’t heal properly and the bud can dry out and die,” said Brett Adams, Jim’s brother and another co-ownerof Willow Drive.

Buds are inserted on the west sides of rootstock trunks so trunks will support them in prevailing winds from the west.

Alberto Barron and Eduardo Morales come quickly behind Santacruz, wrapping buds in strips of plastic for air-tight seals. They will come back in a month and cut the plastic off after the buds heal into the cambium tissue below the bark.

In January or February, when the rootstock is dormant, crews will cut off the rootstock just above the buds. The buds will grow new Cosmic Crisp apple trees that will be harvested that fall for winter storage and then planting in the spring of 2018.

Santacruz, Barron and Morales were in a crew of 45 people finishing the last apple budding at Willow Drive Nursery the morning of Sept. 12. Their crew then joined another crew of 45 budding cherries the rest of the week to finish the budding season that began Aug. 1.

Skeena cherries were budded onto Gisela rootstock. The Cosmic Crisp, the new Washington State University variety, was budded onto Malling 9 No. 337 rootstock.

Willow Drive produces just over 2 million trees per year for planting in orchards in Washington and other states. More than 90 percent are apples. Another half-dozen nurseries in Central Washington each produce about 1.5 million.

Next spring, Willow Drive will sell its last apricot, peach and plum varieties. Van Well Nursery, in East Wenatchee, does a good job keeping up with demand for those, Jim Adams said.