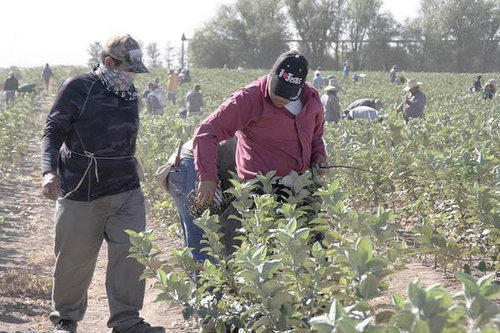 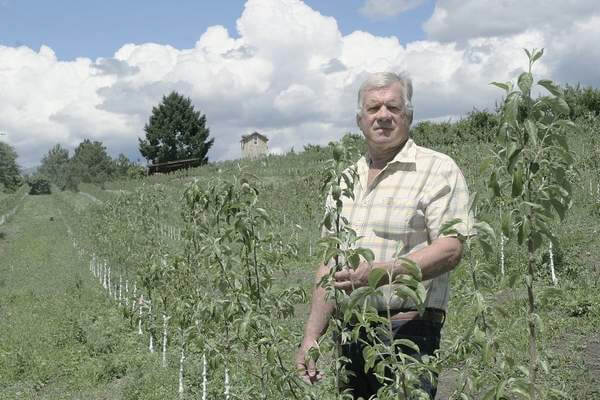 Chris Anderson of Manson, Wash., on June 9 with the Cosmic Crisp™ brand apples trees he planted in April and May. He spent about $20,000 on 2,200 trees and hopes they bring him good returns. About 50 growers, selected in a drawing ,also planted Cosmic Crisp™ brand trees this spring. Photo by Dan Wheat.

MANSON, Wash. — Chris Anderson is in his 37th year of operating a small apple orchard once owned by his father on the north shore of Lake Chelan.

He’s among more than 50 Washington growers selected in a drawing for this spring’s first planting of the Cosmic Crisp, a new apple variety that industry leaders hope will usher in a new era.

It’s a $275 million to $500 million risk on an apple the industry hopes consumers will love. Plans call for it to replace the Red Delicious as the new Washington state apple and be the foundation for higher and steadier financial returns for decades to come.

Apples are big business in Washington state. They are the top agricultural commodity, grossing $2.4 billion annually. About 65 percent of the apples grown in the U.S. come from Washington orchards. 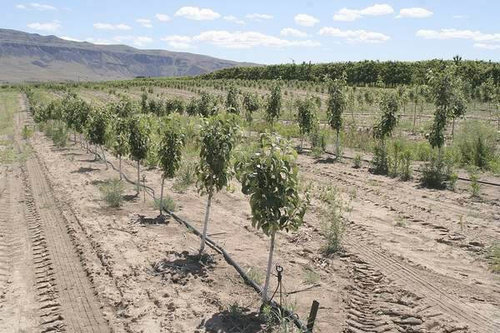 For three weeks in April and May, Anderson laid out neat rows and hauled trees and fertilizer, helping his three workers plant by hand 2,200 Cosmic Crisp trees on a little over 2 acres. Elsewhere in Central Washington, other growers planted up to 20,000 trees apiece, mostly by machine.

Anderson is optimistic about the new apple.

“It’s something being heavily promoted, sounded like it might be fun. And, yes, I’m looking for better returns,” said Anderson, 64, who with his wife, Sally, runs the orchard.

“Fuji are very late and I don’t have a long enough growing season. There have been years I picked them in the snow and years they froze on the trees,” Anderson said.

This rapid roll-out marks a first for the industry.

Ricardo Santacruz reaches for a Cosmic Crisp™ limb of buds as Eduardo Morales gets ready to wrap the bud. They are part of a crew of 45 budding Cosmic Crisp™ buds onto rootstock trees at Willow Drive Nursery near Ephrata, Wash., on Sept. 12, 2016. Photo by Dan Wheat.

“The 5 million is an extremely high number for any one variety of apple tree to be planted in any given year in the state or nationwide,” said Neal Manly, managing partner of Regal Fruit, an apple breeding and variety management company in Ephrata, Wash.

According to Manly’s survey of the state’s nurseries, 40 percent of the trees planted next year will be Cosmic Crisp. Only Red Delicious and Honeycrisp reached 40 percent of annual plantings in the past and Gala peaked at 25 percent.

Newly planted trees produce few apples in their first two years, so Anderson and other growers will knock them off early so the tree’s energy will go toward growth.

Lynnell Brandt, president of Proprietary Variety Management, a Yakima, Wash., company WSU hired to help manage the commercialization of Cosmic Crisp, estimates that nearly 200,000, 40-pound boxes of Cosmic Crisp apples will debut in U.S. stores from the 2019 crop. That will jump to 1.9 million boxes in 2020, 5 million in 2021 and 9 million in 2022.

At the Washington State Tree Fruit Association meeting last December, Robert Kershaw, president of Domex Superfresh Growers in Yakima, said such an accelerated ramp-up has never before been tried. He called it “insanity” and a “gamble” that could end in reward or failure and said it would take the whole industry pulling together to write the Cosmic Crisp success story.

West Mathison, president of Stemilt Growers in Wenatchee, said the fastest switch in the consumption of varieties will happen over a five-year span that will “blow people’s hair back.” In the last two seasons, prices for Red Delicious and Gala have crashed because of too much volume and loss of consumer popularity.

The new mix will be Cosmic Crisp and proprietary varieties, along with some Fuji, Gala, Granny Smith and Honeycrisp. 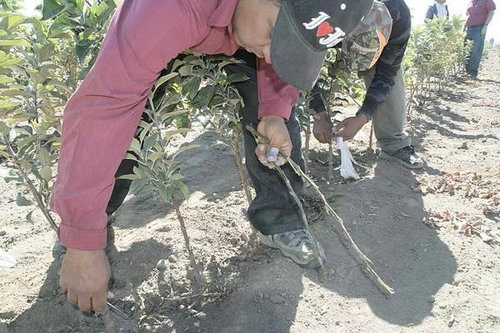 Ricardo Sanchez notches a rootstock stem for a bud from the Cosmic Crisp™ limbs in his left hand. Eduardo Morales, behind him, wraps the bud in plastic at Willow Drive Nursery near Ephrata, Wash., on Sept. 12, 2016. Photo by Dan Wheat.

“We are hopeful Cosmic Crisp can be the new flagship of the industry. We have that hope because it’s such a good apple and because the entire industry will be working to promote the brand in a very positive light and the industry has some exclusivity in the North American market, which can enhance the focus,” Brandt said. Washington growers will be the sole source of the new apple in North America for the first decade.

Kershaw heads a committee of most of the state’s major tree fruit companies advising Brandt on marketing.

“It’s not without conflict but conflict is good to sort out all the issues and have a good healthy debate and to make sure we are looking at everything from all angles and perspectives,” Kershaw said.

The committee has reached a consensus on every main decision, including uniform packaging. Grading standards are next and will need to be tightly managed to ensure a successful launch, he said. 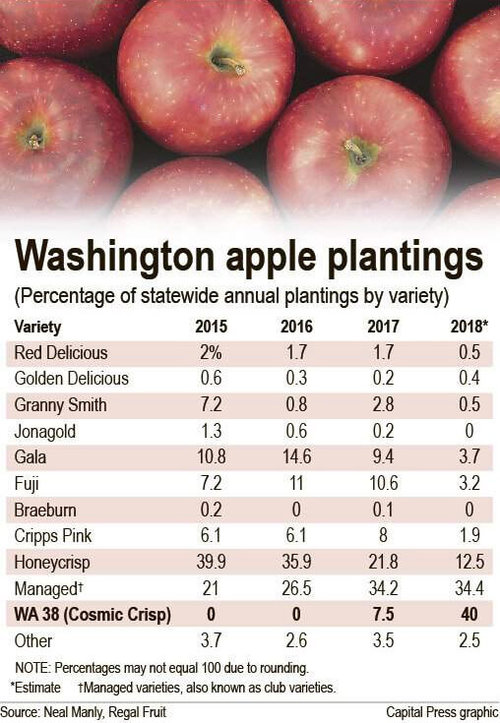 Honeycrisp is a big money-maker for the industry, but its margins have begun to narrow as volume has increased. It’s common for Honeycrisp to sell at wholesale in the $50-$70 per box range while most other unmanaged varieties do well to reach $30. Break-even for orchards is typically about $17 a box.

For Cosmic Crisp, “the expectation is Honeycrisp pricing, but the consumer will decide. If they sell well at high prices, prices will stay high. If they don’t, prices will need to come down to generate more momentum,” Kershaw said.

Red Delicious, the volume king for 82 years, peaked at 61.4 million boxes in 1994 but was still at 39.5 million boxes this year, almost one-third of the state’s apple production.

While the volume of Red Delicious has held up, its price hasn’t. It was selling for $11 to $14.90 per box for standard grade, medium size on June 7. In 2014, it bottomed out at $8 per box. At those prices, growers make no money and packer-shipper-marketers, who get their cut first, make little to nothing.

Grower costs and packing, shipping and marketing costs all vary, but Anderson, the Manson grower, said on a $30 box of fruit the grower makes one-third and on a $50 box the grower can make two-thirds.

Even the popular Honeycrisp has not performed well for him.

“I have not done well with Honeycrisp,” he says. “My packouts are poor.”

Cosmic Crisp should provide better returns than Honeycrisp because production costs will be lower and storage and packouts — after cull apples are taken out — will be better, Brandt said. He believes the new apple will top 30 million boxes annually.

If those numbers hold true and the price stays high, the payoff for the industry would be impressive.

Of those total royalties, around 20 percent will go for commercialization costs including patenting and Proprietary Variety Management’s fee, said James Moyer, associate dean of research at WSU’s College of Agricultural, Human and Natural Resource Sciences. Neither he nor PVM’s Brandt would disclose the management fee.

“We’re discussing ways in which we could create an endowment or some other vehicle to keep the apple breeding program secure for many years to come,” Moyer said.

“We are extremely proud of the breeding program and the excitement it has generated in the industry and we are encouraged by how the industry has come together to cooperate and guide us in the licensing, marketing and developing standards,” Moyer said.