ROCK ISLAND, Wash. — As growers plant the new Cosmic Crisp apple variety for the first time next spring, they need to think about what type of tree structure will be best-suited for robotic apple picking, a research scientist says. 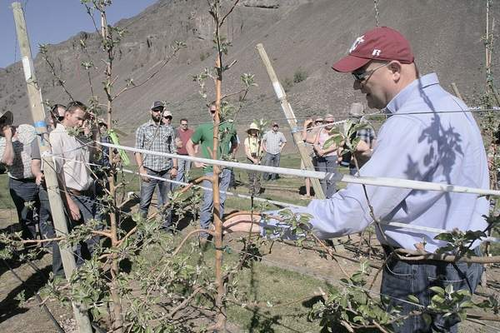 “Cosmic Crisp should work great for robotic picking so which structure do they think is best for that?” asked Tom Auvil, research horticulturalist at the Washington Tree Fruit Research Commission in Wenatchee.

Options are the European V-trellis, spindle or biaxial designs. There are pros and cons to each, said Tianna DuPont, Washington State University Extension tree fruit specialist.

The biaxial tends to work well in heavier soils, the tall spindle in lighter soils and while a lot of growers like the European V it can be difficult for mechanical pruning and harvesting because of greater canopy depth, she said.

WSU and a private company, Abundant Robotics of Menlo Park, Calif., are testing robotic picking they say could be a commercial reality in three to five years.

Auvil and other scientists gave tips on how to grow Cosmic Crisp during a Sept. 22 field day at the WSU Sunrise Research Orchard south of Rock Island. It was attended by more than 100 growers and included the WSU WA 2 apple variety and a Stemilt Growers orchard near Quincy.

Cosmic Crisp, is a cross between [Enterprise and Honeycrisp] that the Washington apple industry believes will become more popular than Honeycrisp and hopes is the future state apple.

About 700,000 Cosmic Crisp trees will be ready for planting next spring, Auvil said. Close to 4 million were budded the last two months by regional nurseries for planting in the spring of 2018, Willow Drive Nursery has said.

Cosmic Crisp can grow vigorously and water and nutrition should be managed so shoot growth in the first year reaches 3 to 4 feet on the vertical leader, Auvil said.

Blind wood is too much limb spacing between fruit and results in fruit growing on outer edges of tree canopies where it is more susceptible to sunburn.

Cosmic Crisp sets most of its fruit at shoot tips so repeated pruning of tips delays or reduces production, he said. Pruning should be done cautiously until cropping controls vigor, he said.

Cosmic Crisp should not be thinned until fruitlet stage, Auvil said. Bloom and post-bloom thinning has not been done and mechanical bloom thinning, done once, resulted in over thinning, he said.

DuPont said Cosmic Crisp apples grow fairly symmetrical, have a narrow size profile, are not susceptible to sunburn or bruising and store better than some varieties, having no problem with many common storage disorders.