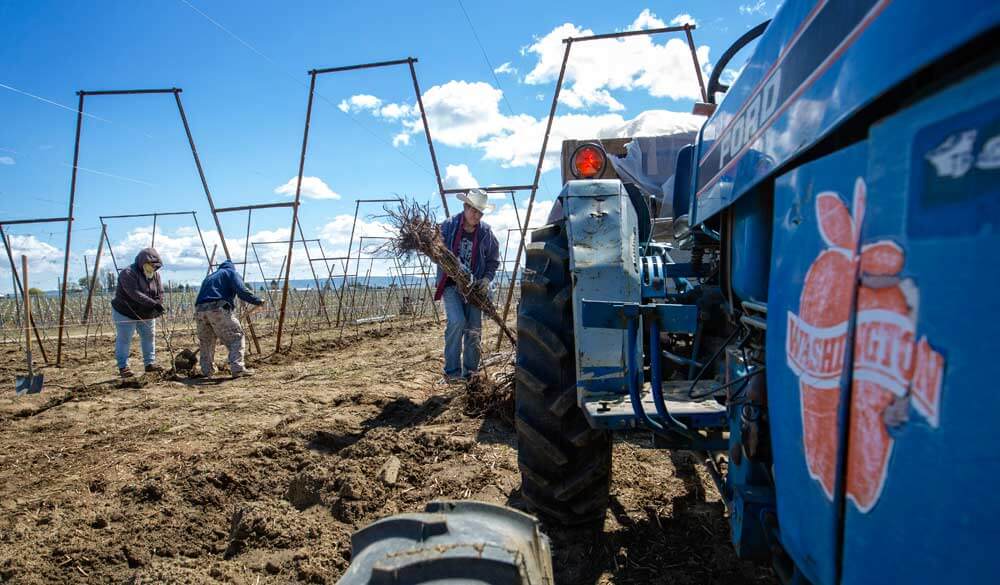 Raphael Sisneros Garcia prepares to plant Cosmic Crisp apple trees in April in what was a Grandview, Washington, vineyard. The new variety, bred and released by Washington State University, is being planted for the first time commercially this year. Photo by TJ Mullinax, Good Fruit Grower.

Washington’s apple industry enters a new world this year as growers plant the first of what, in just three short years, will be 11 million trees or more of the popular new variety, Cosmic Crisp.

If all goes as planned, production from those trees will eclipse the total U.S. production of all but the top half-dozen or so apple varieties by 2022.

Rome and Empire? Both are likely to find themselves in Cosmic Crisp’s rearview mirror.

What about Honeycrisp? Growers might abandon their finicky friend if all they hear about Cosmic Crisp — it’s easier to grow and stores well — is true.

And those longstanding varieties that have powered the industry for years, Reds and Goldens? They’re likely to see continued declines in market share as annual Cosmic Crisp production increases.

Of course, that’s if all goes as planned.

Despite years of breeding efforts, test plantings and market research, there are no guarantees for growers considering an investment of $40,000 to $50,000 per acre to plant Cosmic Crisp.

For starters, there is always the weather; Mother Nature has a way of humbling experts. But there’s also fierce competition for produce shelf space from an increasing number of varieties and products.

Washington growers may dominate U.S. apple production, but they are bit players on the world stage; even though they produce 60 percent of the U.S. crop, U.S. growers overall account for just 3 percent of global production.

The risks are significant, and the pressure’s on. Cosmic Crisp, a Washington State University-bred cross between Enterprise and Honeycrisp, isn’t just a new apple. It’s unique in several ways: No other new apple has had to be an immediate hit with consumers, at a high enough price, right out of the gate. 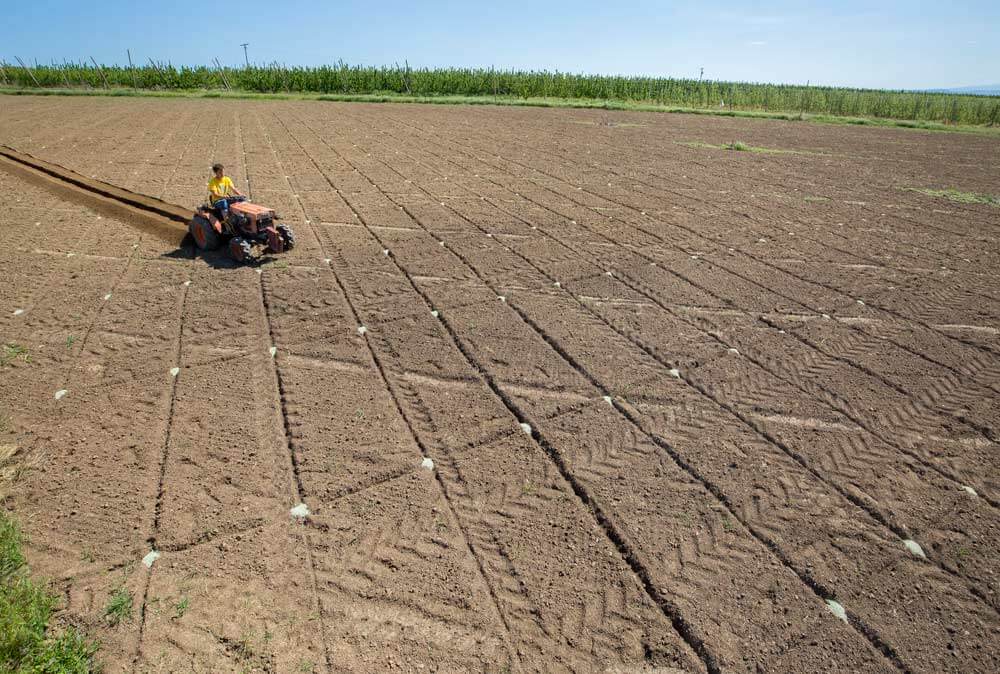 A future block of Cosmic Crisp is being prepared in Zillah, Washington, in May for some of the first commercially available trees to growers in the state. Some 11 million trees are expected to be in the ground in the next three years, making Cosmic Crisp the largest introduction of any apple variety to market in history. This block was days from planting, with Felix Schuhmann marking tree locations with fertilizer and trenching for irrigation lines. Photo by TJ Mullinax, Good Fruit Grower.

It’s often helpful to look at history to predict the future. It’s not as easy with this apple. Asked to name a similar product for comparison, one agricultural economist said he couldn’t think of any.

Growers also don’t control the ficklest factor of all: consumers.

“If, in the first few years, we turn off a bunch of consumers, it’s going to be like trying to to restart a bowling ball rolling it uphill,” said Robert Kershaw, president of Domex Superfresh Growers, a fifth-generation grower in Washington’s Yakima Valley.

He leads an industry advisory committee tasked with developing marketing standards for the new apple.

World production of key varieties, such as Gala, may have ramped up in their early years, he said, but never with a club variety and never just in Washington.

“This is a gamble. It’s not a sure thing. I’m personally shocked by how many trees are going in,” Kershaw said. “It’s just scary when you look at it from Washington’s perspective.” But, he stressed, it’s all about the consumer. “We’ll do everything we can on marketing and branding and everything else, but at the end of the day, the consumer will decide if they like it or not.”

Marketing comparisons shouldn’t be limited just to produce or even agricultural products, said Lynnell Brandt, president of Proprietary Variety Management, the company contracted by WSU to manage the variety, including licenses and marketing.

Rollouts in other food service industries can also serve as a guide, he said.

“What we hope to do is minimize the risk by, number one, having a wow, exciting apple, but also to have the industry as a whole representing it. That’s not been done before. But I think the possibilities are very large and exciting.”

So far, the industry is buying into the idea of a united front. In April, members of the marketing advisory group, which includes participation from packers and marketers who handle between 80 and 90 percent of the state’s production, agreed that Cosmic Crisp would be the primary brand for the apple, followed by Washington Apples, the label of the Washington Apple Commission.

The shippers themselves have agreed to remain almost invisible on any consumer packaging, an unheard-of position by the industry.

Kershaw acknowledged even he was opposed to the idea. “It went against what I wanted, but that’s OK, because we’re being guided by consensus. We’re doing what’s best for everyone, not just best for one,” he said.

Two years ago, Kershaw said, if he had asked the industry if such a move was possible, everybody would have said no.

“It’s never been done before. We’ve never had industry leaders working together like this before, on the same team. If anything is ever going to be a success, it’s going to be something like that, where everybody in the industry is rowing the boat in the same direction.” 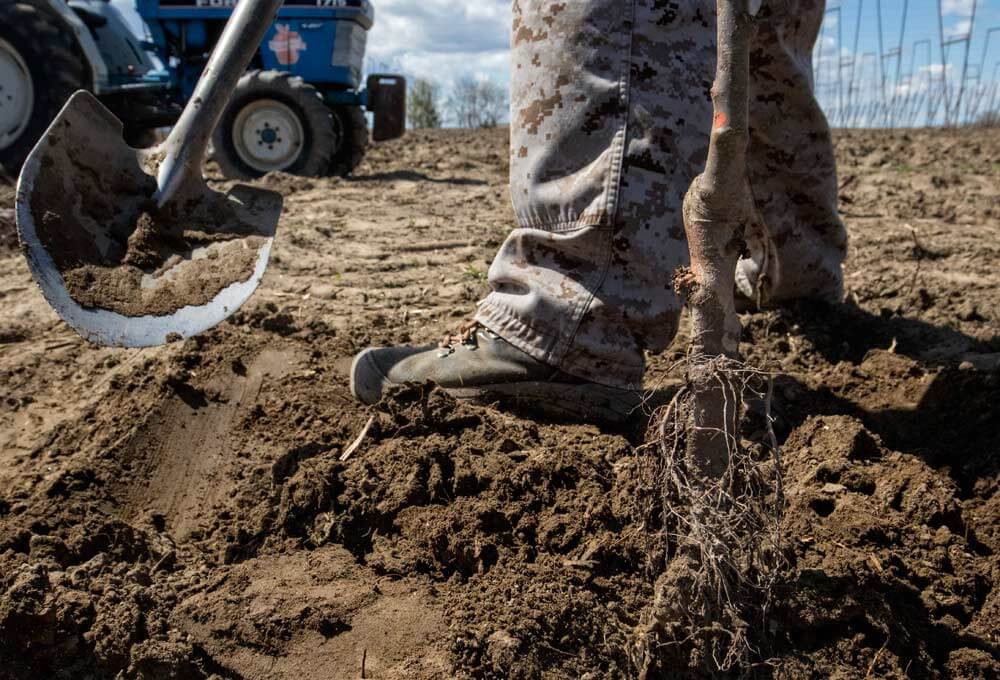 Jose Valencia covers a new Cosmic Crisp tree in a 13-acre block that was once a vineyard. Photo by TJ Mullinax, Good Fruit Grower.

Brandt credited the industry for uniting behind the apple. “If it’s all about the brand, then our ability collectively to promote it really gets amplified.”

Washington growers have a 10-year head start on Cosmic Crisp; international growers in a handful of countries that don’t ship to U.S. markets will be able to grow Cosmic Crisp sooner to protect the patent overseas, but growers elsewhere in the U.S. have to wait.

For that reason, it’s significant that the marketing committee is taking steps to protect the growers — something a united brand does, said Todd Fryhover, president of the Washington Apple Commission.

“It’s a wonderful deal. It goes back to recognizing that it’s the grower that needs to be protected and have this opportunity to have this exciting apple, both domestically and internationally,” he said. “I think it’s a great direction.”

FAILURE IS NOT AN OPTION

So what are the potential fatal flaws in this venture? Across the board, industry leaders point to one: overproduction.

Too much juvenile fruit, too much big fruit, could pose a problem, Kershaw said.

“All apples grow big when they’re young. That’s going to be difficult the first few years of production, making sure the quality is representative of the brand,” he said. “If the quality is good, and we’re able to make sure we don’t put bad tasting fruit and poor quality into the consumer’s hands, it’ll be a success.”

Dale Goldy, co-owner of Gold Crown Nursery in Quincy, Washington, has similar concerns, given the ample size of production projected by just the third year.

“We’re going to have this huge ramp up and nobody is going to know about it,” he said. “We’re going to advertise the heck out of it, and we’re going to educate people, and it’ll be great once we have enough people who know about it. But what about those intervening years while we build the market? What does it look like, from a grower-return standpoint?”

Goldy likened the experience to Fuji, an apple that was phenomenally successful for growers in the 1990s, because they were growing it for the export market.

But those high prices led to overplanting, creating a sudden need for a domestic market among consumers unfamiliar with the apple variety, and prices low enough that growers started losing money, he said.

Eventually, the industry educated domestic consumers about Fuji, but the situation doesn’t have to recur, he said.

“Until that point, there was no focused effort to go out and create consumer awareness. That’s where I think this is different. That Fuji example is the reason we have to have the marketing committee, and the growers have to support it,” he said.

Almost all newer varieties have a honeymoon period as distribution ramps up, but it is only when they stop expanding geographically that the normal forces of demand kick in, said world market analyst Desmond O’Rourke, director of Belrose Inc.

Honeycrisp and Pink Lady, for example, are two varieties that appear to have maintained a price premium after they have been widely distributed.

“That suggests that consumer preferences are key to the sustainable expansion of a new variety,” he said. “There is no way to test that for Cosmic Crisp until it is widely distributed.”

Brandt of PVM also noted concerns about overproduction, but noted similarly that an important element in achieving success is “critical mass.”

“If you are going to have a true rollout, if you are really going to make a true presentation, you can’t just have a few boxes. You’ve got to have enough to try to penetrate enough stores as possible,” he said. “That requires a critical mass, or you can’t really present a global, new brand.” 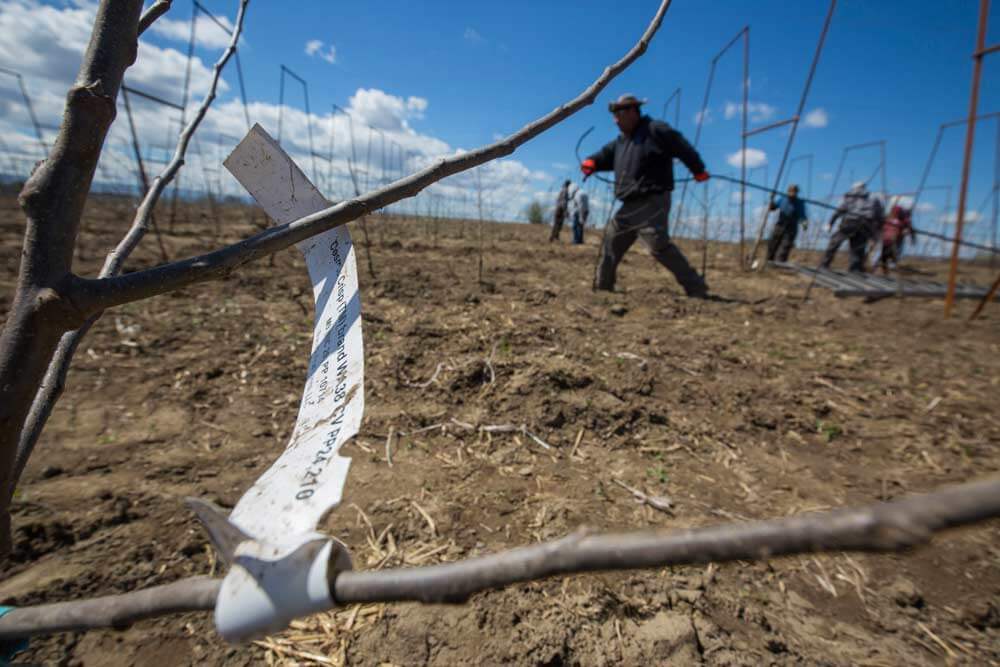 Already, nurseries are seeing a decline in sales for varieties other than Cosmic Crisp across the board, though Honeycrisp sales appear to have taken the biggest hit early. Whether that will hold true in future years remains to be seen.

Cosmic Crisp tree sales also mean an immediate influx of cash to WSU’s breeding program for continued work to develop new varieties; 50 percent of the royalties, or half of the $1 license fee for each tree, goes to those efforts. Additional royalties apply to the packing and sale of each box of fruit.

That’s particularly important to Kershaw. Three years ago, frustrated that Washington growers were still relying so heavily on aging varieties and having to snag new varieties developed in other parts of the world, Kershaw told WSU officials they should be turning Washington into the Silicon Valley of apples.

“We should be pumping out the newest and best varieties that everybody else in the world wants,” he said. “I’m hoping this is just the beginning of a blueprint that will involve more teamwork with the industry, more R&D on new varieties, and that Washington will be known years down the road as not only the best place to grow fruit, but the best place to find new varieties.”