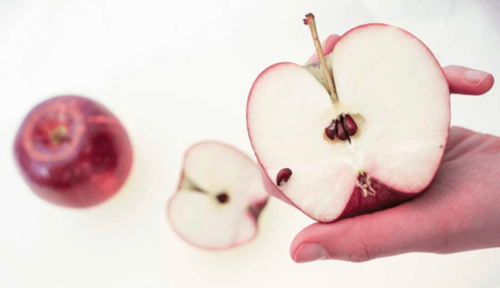 The first WA 38 trees will be planted for commercial production next year.

The first fruit won’t be in the hands of consumers until at least 2019, but a coalition of Washington’s biggest fruit marketers is coming together to ensure that consumers will want and buy the apple branded Cosmic Crisp — and come back for more.

The stakeholders in this venture are many, from university researchers to growers, packers and sales companies, to retailers and consumers. And the stakes are high — no more so than for the growers who face the highest financial risk on an untried variety.

Washington State University bred the WA 38 apple and, after years of orchard trials, hired Proprietary Variety Management to handle the commercial rollout: patent, licensing, propagation and sales through several of the nurseries that make up the Northwest Nursery Improvement Institute, and branding and marketing.

“When you’re looking to benefit all the stakeholders, the longer Cosmic Crisp has value to the consumer, the more value goes into the pockets of the stakeholders. And that’s the key. That’s what any business venture is about with customers,” John Reeves, PVM’s general manager, told Good Fruit Grower.

And because growers have the highest risk, Yakima-based PVM has worked hard to have the industry heavily involved, whether it’s a marketing group or a standards committee, he said.

“If I was a grower, I’ve got to have the confidence in the system,” he said. “We want to minimize the risk.”

WA 38 trees will be exclusive to Washington growers in the United States for at least 10 years, beginning in 2017, when the first commercial orchards are planted.

Already, a dozen of the industry’s largest sales companies have come together to create a marketing advisory board, chaired by Robert Kershaw, president of Domex Superfresh Growers.

In addition, representatives of five companies comprise a subcommittee that will help to develop quality standards for Cosmic Crisp. 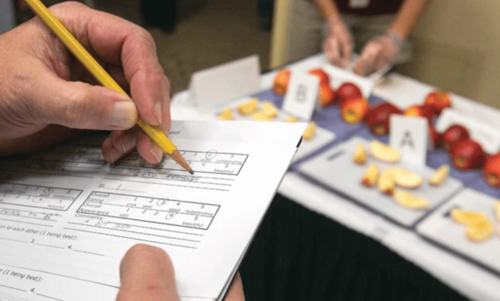 The subcommittee, chaired by Dave Allan of Allan Brothers Inc., who has been growing WA 38 in an orchard test block for seven or eight years, has met just once so far.

But Allan said it’s clear that everyone involved views the adoption of quality standards for Cosmic Crisp as a cooperative effort, which he called “significant.”

The market for Cosmic Crisp will be established on the retail shelf, he said, and any product that does not meet consumers’ needs will remain on the shelf and get old.

“If the product sits on the retail shelf and it doesn’t sell, then one of two things happens: Somebody picks it up after it sat on the shelf too long and the quality isn’t very good, or the retailer takes it as a loss, a shrink. Both of those situations are bad,” he said. “That is probably the primary driver of why we need to have some unified, uniform standards that we can work to.”

The subcommittee made just one recommendation in its first meeting, asking WSU to continue developing best practices for growing and storing Cosmic Crisp.

However, the subcommittee members also discussed other key areas of importance to growers of WA 38:

—Should standards compliance be administered by the Washington State Department of Agriculture or by the industry itself?

Having the industry handle compliance would allow producers of Cosmic Crisp greater latitude to change standards very quickly, without any bureaucracy, but they also would likely incur additional costs.

“Traditionally we’ve always had compliance with WSDA administrating it, so considering an industry compliance system, that in and of itself is a pretty significant question,” Allan said.

—Should standards be set for minimum harvest date or minimum maturity date?

“There is going to be a lot of pressure to get this product to market quickly. You pick it, you want to sell it,” Allan said. “And there’s a possibility that could be abused, so we’re looking into that.”

—Should there be more than one color standard?

“The difference between them, the taste is about the same,” he said. “But you put that out there, and you have a checkerboard pattern on the retail shelf. You’re better off having the dark ones in one group and lighter ones in another group.”

WA 38 also is unique in that it can sometimes have a green stain or spot, which may need to be addressed in the standards, Allan said. “Green stain is something we don’t really understand. It may be a problem; you can’t sell an ugly apple.”

The committee also may adopt the common grade standards for punctures, splits and limb rot.

In two other areas, the committee opened initial discussions: whether fruit from 2-year-old trees should be marketed for sale and the involvement of the sliced apple business.

There can be significant differences in fruit maturity among 2-year-old trees, Allan said, yet the second year can present a significant economic advantage to the grower if the trees are big enough to crop.

“It can be really difficult to get a nice looking pack with 2-year-old trees,” he said. “Would that be something we want to do? We could probably just eliminate problems, start on the third year, and everybody would know from the onset. We’re talking about that.”

The subcommittee also discussed encouraging the sliced apple business to get involved with the variety.

Cosmic Crisp is slow to brown and has a moderately high acid level, which allows for a better taste in a cut product, Allan said. “We think there’s a lot of potential there. It gives us an economic driver, a home for a lower quality apple. Most apples don’t have that option, and we might be able to brand Cosmic Crisp in those packages.”

That makes it a product that could fill a niche in a growth market, he said. “I think eventually, 15 years from now, we’re going to sell 20 percent of our product in the sliced format, because that’s convenience,” he said. 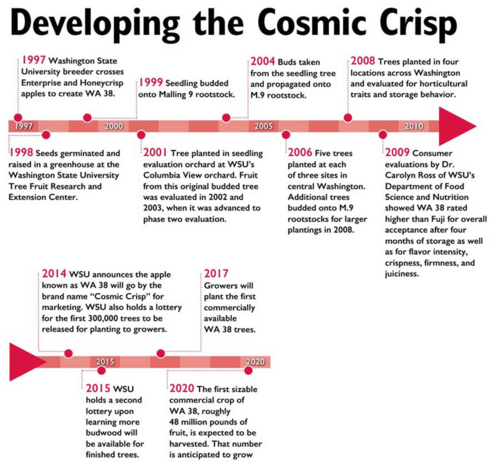 “Most of the growers I know are looking at return per bin,” he said. “If you’ve got several different places in the store where the same brand is showing up, it cross sells. And the more times that people see that brand, the more they look for it.”

Reeves said he also is cognitive of growers’ concerns that this apple will turn into a commodity right away. “Minus really good brand research, that could happen. But I also think we have an opportunity to do something with the brand, with a brand promise, and do something for a long time.”

As part of its management of the Cosmic Crisp variety for Washington State University, Proprietary Variety Management will be deploying a new database to manage the trademark and patent on behalf of the university.

Participating nurseries will be required to provide information on who has obtained WA 38 material, where it’s being planted and how much. Packers, meanwhile, will be responsible for providing information on the end products, including packouts and pricing schedules.

The database will enable PVM to cross-reference plantings and production on behalf of everyone involved, forecast production by region of the state, and aid the industry with marketing and sales, while keeping individual information confidential, said Lynnell Brandt, PVM president.

“This allows the industry to come together,” Brandt said, “and say, ‘This is what we have to play for.’”